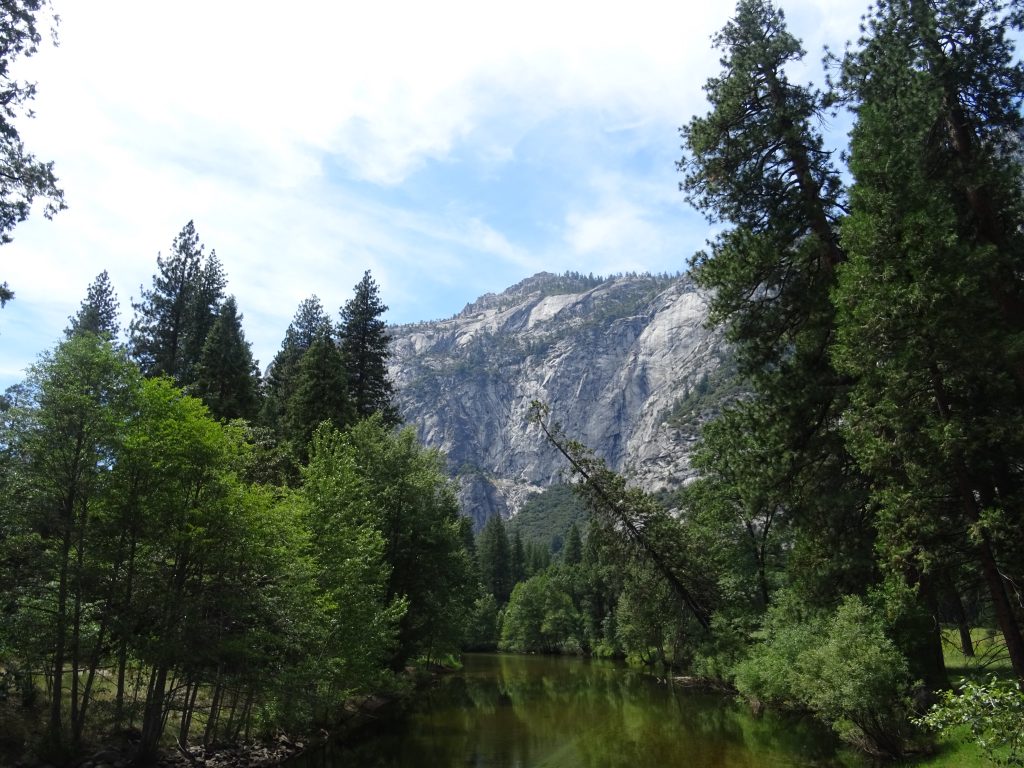 The last two days have been spent at two of California’s most impressive areas of natural beauty – Yosemite national park and Lake Tahoe. Both are such impressive places, although they take slightly different approaches to tourism.

Yosemite Park itself is absolutely huge but the main highlights are in and around Yosemite valley, which offers phenomenal views of the incredibly tall pines, the numerous waterfalls, and the 3000-foot high summits such as the famous El Capitan. The only downside was that every man and his dog also decided to visit the park on the same day so it was slow-moving in the car and difficult to park – apparently up to 10,000 cars in the park but only 1,000-odd parking spaces. Once on foot though, the sheer size of the area means it does not feel crowded and we could go for a while seeing very few people.

To get around the park a little bit quicker, we hired a couple of bikes (that were rickety, uncomfortable pieces of junk!) and did the loop that includes Yosemite Falls (highest waterfall in the US), the Half Dome summit, and various other great sights. Other than Kirsty almost wiping out a little Vietnamese girl, it was a lovely ride and quite nice to burn off some of the food we’ve indulged in over the previous days.

Today was Lake Tahoe, arriving late morning to a very different experience. Whilst Yosemite feels like every effort is being made to preserve its serenity – there are some commercial establishments in the park but it’s not excessive – Lake Tahoe is the opposite end of the scale, with massive amounts of commercialisation and excess. There are casinos, tattoo parlours, tacky gift shops and such – it felt a bit like Blackpool, only with sunshine and a slightly better view than the Irish Sea. The lake itself, though, is stunning and huge – around 190 square miles according to Wikipedia, with a 70-mile circuit around the edge. Driving gave some awesome views but most of the parking spots were taken so we did not get much chance to explore the lake on foot, but we did manage to stop a couple of times at the roadside to admire the views.

Both of us have been to Lake Malawi so the bar for impressive lakes is extremely high, but Tahoe certainly gets close. With all of the greenery, the deep blue of the lake, and the clear and sunny skies, it really does feel like being in a postcard – all of the photos look amazing without even trying. We have definitely experienced some stunning vistas over the last couple of days.

Tomorrow, we go from natural beauty to man-made thrills as we check out the Six Flags theme park on the way to San Francisco.