The holiday didn’t get off to the most perfect of starts when, on arrival, we were told that our flight to Toronto that was supposed to leave at 3pm was going to be delayed until 9pm. As someone who despises sitting around in airport terminals waiting for gates to open and boarding to begin, the prospect of waiting an additional six hours did not fill me with joy. The annoyance was furthered by the fact that this delay – caused by either “maintenance” or “weather problems yesterday” depending on which Air Canada rep. was speaking – meant that we would miss our connecting flight to San Fran, along with our hotel for the evening and the pick up time for the car we were to hire.

END_OF_DOCUMENT_TOKEN_TO_BE_REPLACED 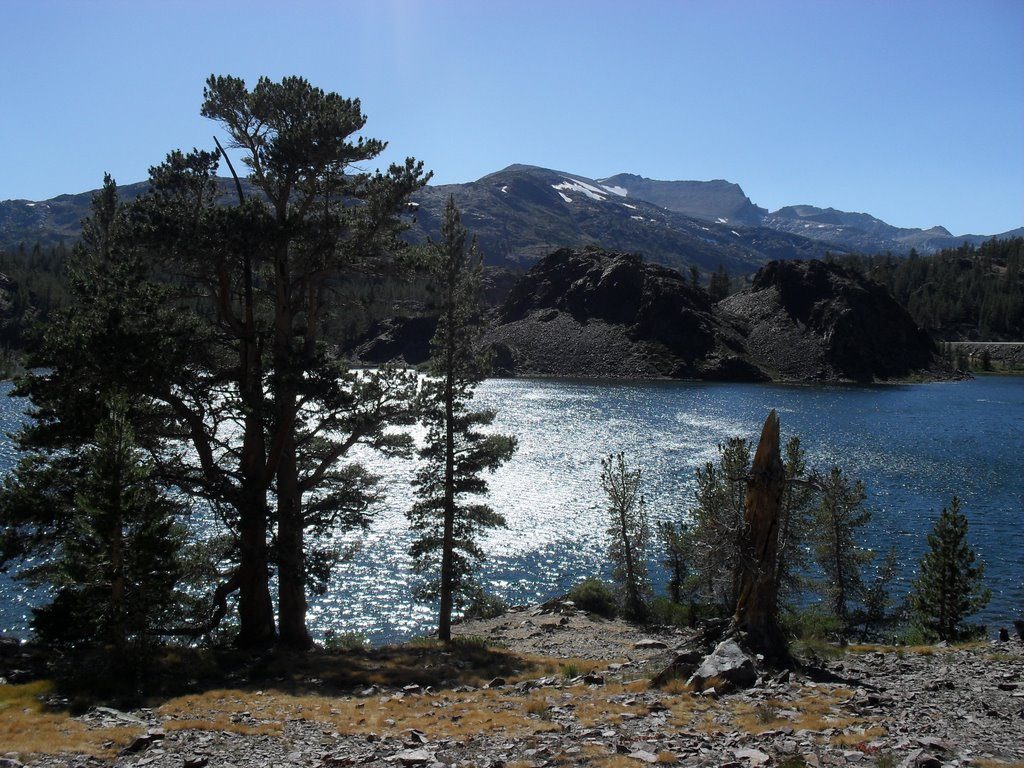 We’ve had a really cool 2 days in Yosemite (well, driving into Yosemite from our motel which was quite a way out). However Yosemite has got the most spectacular scenery I’ve probably ever seen – mountains, lakes,valleys, outcrops, rivers which I liked to paddle in, meadows, forests… and all this with endless sun and cloudless skies.  Can’t be bad.

Despite there being tons of people at certain points, if you just go a few paces off the path you can avoid virtually everyone (lots of people seem way too lazy to walk).  Aaron was nominated as driver as he told me off the day before for driving and wanting to look at the scenery, so he’s been driving while I’ve been staring and becoming quite clever at taking photos out of the car window.  Yesterday we went uphill and saw spectacular views from the top e.g.Glacier Point; today we were in Yosemite Valley and at the bottoms of various waterfalls.

There’s loads of new ‘English’ I’m learning e.g. yield = give way, turn out = lay by, and my favourite Ped Xing, which I actually thought was Chinese until Aaron (after pissing himself laughing at me) explained that it meant pedestrians crossing.  Quite amusing.

Today we drove through Yosemite to get to Lone Pine, a bit of a god-forsaken place where we’re staying this evening on the way to Death Valley.  The road we took through Yosemite today was really amazing.  The scenery was totally different to yesterday and the road rose to nearly 10,000 ft.  We sat for a bit by Lake Tenaya which was stunning. Once we left the park, I then took over driving for a bit (the ‘easy’ bit as Aaron put it,  down the freeway).However it wasn’t all that easy – I nearly pulled out straight into something in the next lane. Whoops.  The left-hand drive thing is OK though,getting quite used to it now.

Can’t really get used to the money thing though – first thing is that prices advertised are always before tax and so you can never work out how much you need to pay, resulting in me carrying round what seems like a ton of change as I can’t count it out ready.  Frustrating.  At Toronto airport I had my first taste of this when we were trying to get some breakfast with our $8 voucher from Air Canada instead of a hotel room (how good of them), and I had carefully chosen what I wanted so it came to as near $8 as possible, obviously fogetting the tax thing.  Really irritating, but fortunately the woman behind the desk took pity on me and let me off the rest.  The other thing I can’t really get to grips with is the tipping system, which seems equally as absurd.  And I still don’t know all the coins and how much each is. Fortunately Aaron seems to know more and is dealing with most of the money, while I keep mine firmly in my purse (moths will fly out when I get home).

My bikini got its first wearing today which was exciting – went for a quick dip in the ‘pool’ (pond) at the motel after dinner this evening.  It’s so hot in the evenings too, so lovely.

On Saturday, we left Lone Pine and headed towards Death Valley. We didn’t really know what to expect, other than a valley where little grows/survives, and so it was quite exciting.

Wow, the scenery was stunning, like nothing I’ve seen before ever.  Was really bleak and barren and no sign of intelligent life except a few snakes and lizards and insects.  The geology was amazing, rock strata and tilted rocks, outcrops, alluvial fans and stuff, was so interesting.

In a moment of wisdom we thought it’d be a great idea to do a 2 mile walk at 2pm.  So we headed up the Golden Canyon with a litre of water each, and, although I like to think I’m good with heat, I struggled and a little bit of dizziness/mardiness ensued.  Aaron was very good though as I’d finished my water within about 5 minutes and offered me his, but I just couldn’t believe the heat.  For once, I wasn’t so concerned about sunburn (had covered myself in suncream), just about whether I was going to be able to get back!  We survived though, and the scenery was stunning yet again.  Apparently Death Valley is the hottest place on earth.  When we got back to the visitor centre it was 45 degrees, which was average for August.  And we were just covered in salt.  A bizarre experience.

Water wasn’t too hard to come by ‘cos they had taps at the visitor centre where you could fill bottles up, but I hadn’t expected to get through it at the rate we did.  And how hot the water would be!

I have to say that the quality of the public toilets in the USA so far has impressed me (and that’s a compliment indeed, being someone who hates public toilets).  However I have been mortified on a couple of occasions in the National parks where there has been no running water to wash my hands.  I can understand why, but it’s gross.  So I was so happy when I found one with water yesterday 🙂  Fortunately I’d brought with me some alcohol hand stuff (thanks David), so at least felt semi-clean. But urgh!

We saw some amazing stuff in Death Valley – Mosaic Canyon with shiny marble ‘walls’ (accessed via a 2.4 mile gravel track hmmmm), sand dunes where we ate our lunch (my ham sandwich wasn’t short on filling – there was more ham than bread!),beautiful view points, including Dante’s View where you can see the highest point and lowest point of the park simultaneously.  The badlands and salt marshes were spectaular too, and what you thought was sand on the floor actually was just really really dry, cracked mud.

I did just about all the driving (and very well, I thought) until it was time to drive to Las Vegas and Aaron took over cos he coudn’t understand the ‘hieroglyphics’ that I’d written as directions, how rude.  On the way here we passed through the town of Pahrump, which was so bizarre, but probably typical.  The towns are so spread out – probably about 200m between houses, and just so kind of lifeless.  It seemed quite a seedy place and we had to laugh at some of the billboards as we went through.  I was very pleased Aaron drove though, cos the traffic in Vegas is crazy and it wasn’t an amazinggly pleasant experience as we didn’t really know where we were going.  And everyone was going so fast.  He did a good job though, and we arrived at our hotel, Harrah’s, and got upgraded too cos they didn’t have any non-smoking rooms with 2 beds left woooo!  So Aaron’s got a king-size bed, and I’m on a titchy single bed on wheels, but slept well and looking forward to exploring the city.  I think it’s going to be crazier than I imagined…

The saying goes that “what happens in Vegas, stays in Vegas”, but obviously that would make for a pretty crap blog entry, plus we haven’t done anything outrageous, so on this occasion I am prepared to share!

The drive in was certainly interesting. Just in case driving a different, left-hand drive car on the wrong side of the road through one of the busiest cities wasn’t enough, Anna took the opportunity to hone her inimitable passenger-seat driving patter that always makes me want to drop her off at the side of the road and carry on alone. Highlights from this journey include “can you slow down please?” as I put my foot down to try to merge into a lane of cars going 10mph faster than I am, and “can you just stop for a minute?” as I hang around in the outside lane on a green light with cars beeping behind us wondering why on earth we are stationary. The arrival at the car park was a blessing!