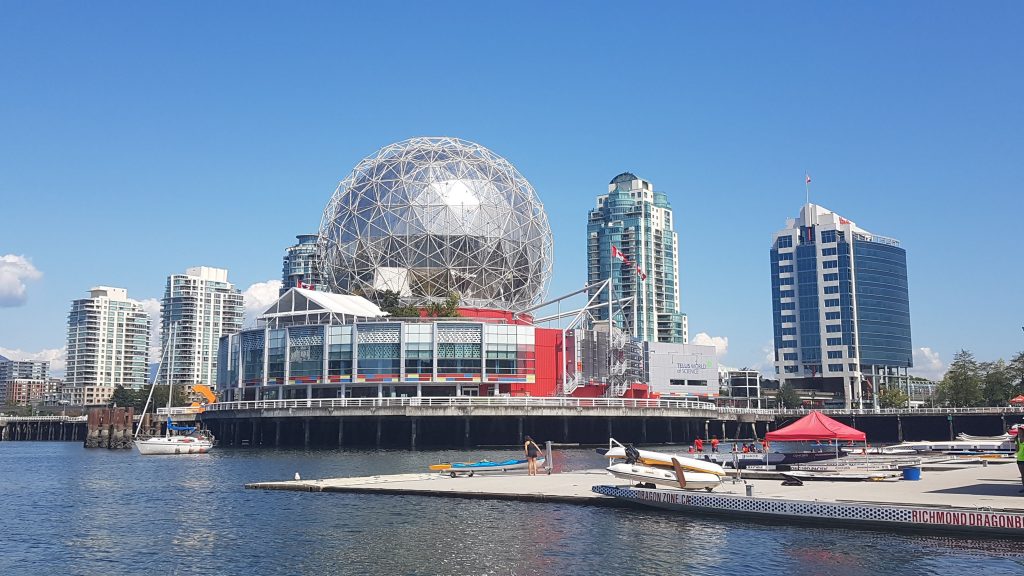 We’ve wrapped up our North American adventure with a fabulous three days in Vancouver, but quickly before I get to that I should fill in a couple of activities missed in previous blogs. In Portland, one of our visits was to Powell’s City of Books, which is a giant bookstore (seemingly the largest in the world) that takes up a whole city block and is on three stories. It really is impressive, and people spend anywhere between an hour and an entire day there. In contrast, Portland also has the world’s smallest recognised park, which is only about 1m² and houses one small tree! In Seattle, we took an entertaining underground tour as the city essentially built itself on a higher level after a massive fire took out much of the city in the early part of last century.

So then Vancouver. As mentioned previously this city has been on my visit list for a little while, and while it would have been nice to have taken the train across the border (which supposedly has some great views), it was fully booked so it was a bus option instead. We had been put in touch with the cousin of a work friend who lives in Vancouver, Clive, so we arranged to meet him and he did a fantastic job of showing us around the touristy and less touristy areas of the city over the days.

Vancouver is an expansive and sprawling city but is not overcrowded or overly busy. On our first evening, we took a walk around one of the beaches and then around a ‘lost’ lagoon, and then found our way to a place that served great food and beer.

On the second day, Clive took us to Lynn Canyon, which houses lots of hikes and trails but also a rather impressive suspension bridge. Apparently Vancouver has another one elsewhere that is less impressive, more touristy and charges a fee so it was great to go across this one – for free – and feel like locals. He then took us to an amazing viewpoint around a third of the way up a peak that offered some spectacular views of the city – and for once the weather was on our side and we could see everything!

From here, we headed to Whytecliff beach where after a bit of rock climbing we met with some more seals – definitely the animal of the trip – and a little scramble up a rock that looked quite innocuous from a distance but was then alarmingly steep to climb when there gave us yet another great view of this lovely city.

The evening then brought food and beer again – Vancouver has a thriving micro-brewery scene and we got to sample a variety of super local beers and ciders. Handily our pub offered a flight of smaller sized different beers so that you could sample a number of them without becoming wasted!

Finally on our last day we had a boat tour around the bay, visited the Granville Island markets, took Clive to his first ever escape room, and then bid a sad farewell to what has probably been my favourite city on the trip – probably in part because it’s a great city but moreso because we had the local expertise to guide us around too and see bits that we just wouldn’t have otherwise seen.

And that ends our trip! A journey of planes, trains and automobiles, as well as sea buses, boats, bikes and Segways. I genuinely love a good American road trip and throwing a bit of Canada into the mix was the icing on the cake. Now to return to the drizzly UK and start thinking of a new road trip for a few years’ time.

Thanks for reading and commenting 😀